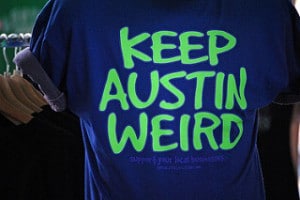 “Keep Austin Weird” isn’t just a slogan…it’s a state of mind.  We have quite a few fun and quirky things around here that keep us “weird” and we love it!  Being an award winning Austin Real Estate Agent helps me know some of these fun details that you may or may not realize.  Let’s check some of them out…

Where Is Pecan Street in Austin?

For example, we were “green” before “being green” was cool.  Did you know that Austin’s streets are named after trees and rivers?  Yes, it’s true.  The streets that run East and West are named after trees and those that run North and South are named after rivers.  No…there is no rare 6th Street tree!  However, did you know that 6th Street was originally named Pecan Street?  It seems the names changed in approximately 1897-1898 according to city-data.com.  So, when someone says, “Meet me at the Pecan Street Festival,” please don’t pull out a map and start looking for “Pecan Street.”  In fact, here in Austin, you can probably just catch an Uber or follow the Google car.

Also, do you know how to pronounce Koenig Lane?  What about Manchaca?  If you have been in the Austin area for a while, then you do.  But, according to Sofia Sokolove of Culture Map Austin you might be new to the city and the Austin Real Estate Market.  She cites the Census Bureau’s statistics have Austin averaging approximately 157 new residents a day.  Yes…you read that correctly…a day.

So, back to my question, do you know how to pronounce Koenig or Manchaca (and seem like you have lived here for a while)?  Let me help you out.  Koenig to most Austinites is pronounced (Kay-nig) and Manchaca is (Man-chack).  And, don’t even get me started on Burnet Road!  (Here’s a tip…the saying goes, “It’s Burnet, durn it. Learn it!”)

And, if you’ve ever needed to go anywhere in the Austin area you have sat in traffic.  (You don’t need an experienced Austin real estate agent to tell you that the traffic is bad).  Ever sat behind a car on Mopac (aka Loop 1…and by the way, Austin’s roads many times have multiple names) and wondered what in the world does “Mopac” mean?  There’s a joke that says, “Mopac is an ancient American-Indian word for ‘parking lot.’”  I know that you have felt that way many times.  But, no, it does not mean “parking lot.”  Have you ever noticed that there is a railroad track in between the Northbound and Southbound lanes?  I’m willing to go so far as to say you have watched a train roll past you as you sat in that “parking lot” in traffic and wished you were on it (at least you’d be moving – right?).  Guess what?  That railroad line is the Missouri-Pacific Railroad (and shortened, that is…Mo-Pac).  Now you know!

Those are just a few details about Austin that experienced Real Estate Agents in Austin TX know that you may not have already known.  I hope you have had fun learning a few of the “weird” details about this great city.  What else do we know?  We know the Austin Real Estate Market.  This market is always changing and you want a top REALTOR® helping guide you through it.  I would be honored to earn your trust and help you.  Please give me a call at (512) 732-3820 or simply click here today.